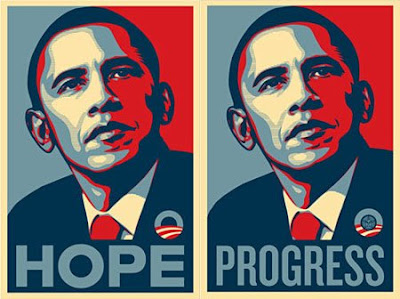 Once again, President Obama is using the internet to get his message out the way he wants. Over the last week, he has gone on a national tour to promote his economic package and get the message out to American's that the economy is on the road to recovery.
On Tuesday, he had a large question and answer session with the national press. You've probably seen this before: he stands at a podium in the Whitehouse and answers poignant questions from the White House Press Corps. All well and good - especially if you are over 50 and don't really use mediums other than news and TV to get your daily intake of the news.
But Obama realizes that he's missing a huge portion of Americans by only having a large press conference - most notably, younger citizens who were a key reason why he won the election in the first place.
To get his message to them, he's doing something very simple but revolutionary - especially when it comes to the Presidency - he's hosting an session online where he takes questions from anyone. The session is occuring today and the White House reports that by 7AM this morning there were over 77,000 questions already submitted. Obama will answer key questions and use the forum to continue his public campaign to spread the word about the state of the economy.
Detractors would say that this is just a stunt. That real people who submit quesions have an extremely low chance of having them answered and that the Moderators will just pick the layups that best-fit Obama's pre-determined responses. Maybe.
For the people who actually do get a question through, it will be a pretty cool feeling ("Hey mom, Barack just answered one of my questions!"). I think the people who should be really interested in this approach, though, are onces who have made their living as 'traditional' journalists.
Here is the message Obama is sending to them: "You don't control the whole story anymore. I will get my message out, my way."
In the past, the White House question period was one of the most important parts of the democratic process. Veteran reporters, through their investigations and stories, asked educated questions and reported back to the world how the President and his team responded. They shaped the stories that the world consumed and that was that.
Now Obama is using the web to speak directly - on a one to one level - with his citizens.
For brands out there who are still afraid of blogging or getting involved in the conversation, this should be the greatest example ever of how to show them that you must participate actively to get your message out properly. If you're brand thinks it would be hard (due to the types of comments they might get or the conversation that might be generated), imagine how tough it would be for a President.
Posted by Unknown at 9:48 AM Links to this post

MINI Does it Again

This quote says it all:

It's about time a smart-brand made fun of all the fake viral vids out there. Loving this.

From Adrants
Posted by Unknown at 9:24 PM Links to this post

Fallon has learned a few things...

I like the Fallon blog. It always has a great presentation once a month on a hot topic and it's full of cool insights that any ad planner would be interested in.

They've been blogging for over two years now and have put together a quick deck (below) on some of their key learnings. My favorite part is how they show how a simple blog can enhance the mentions and image of the agency as a whole. 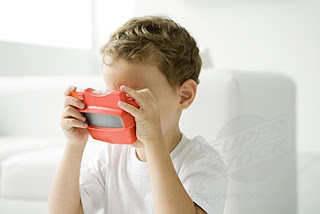 I never thought this day would come. Reading last week's issue of The Economist tonight, I stumbled upon a short article about the death of the Viewfinder.

Fisher-Price, the manufacturer of the device that has been a staple of Americana for the last 70 years, announced the elimination of the toy due to declining sales. Sure, the web is more exciting and you can pretty see anyplace in the world with a quick, click of a button but the Viewfinder was a great toy. As I kid, I used to love looking into these things and watching a show about the latest Disney character or random far-off place. It was simple and sweet.

"In all," the Economist writes, "more that 1.5 billion [Viewfinder] reels have been produced, everyone to the same size and format, and usable in every model of Viewer ever made."

That's a ton of content and a lot of cool memories. I love the web but I'm going to miss this little guy.
Posted by Unknown at 10:19 PM Links to this post 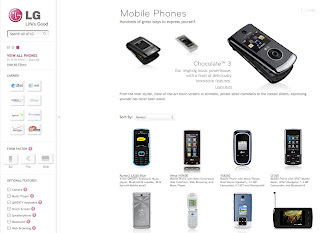 A super-smart colleague of mine just helped LG launch their new US website. It was a massive undertaking and as result of some smart planning, the new experience is slick, simple and very user friendly.

What I love most about this site is the navigation on the left-hand site. I love how it always stays with you. To a user not in the digital space, you'd never think about how intuitive the nav is, you'd just be happy that it works seamlessly and you know exactly where you are within the site.

But if you look closer, you can see that the navigation allows you to scroll back and forth without changing your current page or hitting the dreaded "Back" button. Why does this matter? Because in large sites you can get lost - quickly. And you can often miss what you are looking for because a capable IA hasn't thought about how the content should be structured and flow.

These ideas are never given enough credit - they're not the sexy 60 second spot or the cool Facebook app. But they matter and allow brands to keep consumers feeling good about them (and help them find what they are looking for...a key step in any purchase decision).

Great idea, Jenna, and nice work to all the LG team who worked on the redesign.
Posted by Unknown at 9:09 PM Links to this post