Over the last few weeks, I've read Kevin Kelly's masterpiece, What Technology Wants. If you are at all interested in technology, the future, our past and where everything could be going, you've got to read this work. It's filled with enough insight to warrant a new blog (which I'm thinking about doing) but for now, I wanted to focus on one thought in it.
One of the early chapters deals with the idea that innovation is inevitable - there are examples throughout history that the same discoveries - the lightbulb, the camera, the telephone - were discovered independently by multiple inventors in the same time period. During this chapter, Kelly shows the Inverted Pyramid of Invention which polymath and serial inventor Danny Hillis describes in detail: 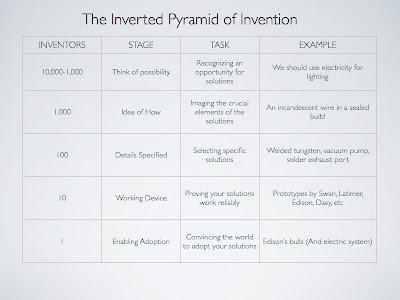 "There might be tens of thousands of people who conceive the possibility of the same invention at the same time. But less than one in ten of them imagines how it might be done. OF these who see how to do it, only one in ten will actually think through the practical details and specific solutions. Of these, only one in ten will actually get the design to work for very long. And finally, usually only one of all those many thousands with the idea will get the invention to stick in the culture."
When I read this example, I couldn't help but think of the agency creative process - starting with high level concepts (anything is possible!), selling the high level idea and then starting to work through the core details (well, not anything...), working through feedback towards a prototype (is this even doable?), banging out a half-functioning execution (at least we got it done!), launching and hoping that a mass of people will accept it (..they didn't, but it's not our fault!). And restarting the process again.
Those in digital know that execution is just as important as the creative concept itself. Anyone can think of the possibility of an aggregated content site that magically tailors content to any users desires without them asking anything, but few - other than Google - can actually build, execute and launch it.
More and more, a focus on finding the people who can generate an idea of how it works, outline the details required, build a prototype and enable adoption has become more critical.
Because most agencies are great at the 'Thought of Possibility'. We are creative, at the highest level, and can imagine great experiences. But moving down one level (let alone four) is a massive challenge - and one that if we don't answer, will leave us confined to the corners of a pub where we host nightly 'what if we did this?' conversations that quickly lead nowhere.
This isn't to suggest that creativity is not important. To quote Kelly in a later (unrelated but still relevant) passage:
'And because we cannot image it [a life without technology], it will never happen, because nothing has ever been created without being imagined first.'
Imagination is vital. It creates possibilities and ideas. But a possibility is not a prototype.
What do you think? How could we get better at taking a great possibility and distilling it through the Pyramid of Invention?
Posted by Unknown at 5:05 PM Links to this post