I'm beggin you, Paris Hilton, stop trying to make "funny" videos. They are awful. You are not an actress, you're just rich. Please stop.

If I want to hear a political opinion from someone who knows zero about foreign policy, the struggling economy, social issues and goverment policy, I'll write Sarah Palin an email.

I posted the new "video" but I'd recommend not wasting 2:30 of your life. Play at own risk.

See more Paris Hilton videos at Funny or Die
Posted by Unknown at 11:50 AM 1 comment: Links to this post

"1. Delete 120 minutes a day of 'spare time' from your life. This can include TV, reading the newspaper, commuting, wasting time in social networks and meetings. Up to you.

3. Spend at least one weekend day doing absolutely nothing but being with people you love.

4. Only spend money, for one year, on things you absolutely need to get by. Save the rest, relentlessly.

If you somehow pulled this off, then six months from now, you would be the fittest, best rested, most intelligent, best funded and motivated person in your office or your field. You would know how to do things other people don't, you'd have a wider network and you'd be more focused."

Godin is certainly idealistic, but his ideas are always solid and intriguing. Love this post and think that if you tried to apply this to your life for even a week it would make a huge difference.

Posted by Unknown at 11:40 AM No comments: Links to this post

Does this fit the brand?

Removed the video becuase it automatically played but you can view it here.

I think it's a nice idea...but I don't know if it fits with Doritos...thoughts?
Posted by Unknown at 3:06 PM 3 comments: Links to this post

The Man behind the brand 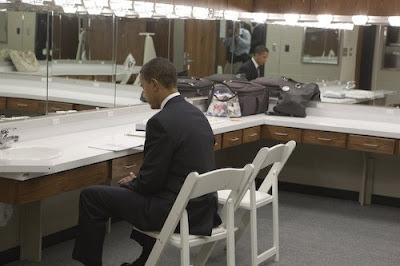 I'm not going to write about the upcoming US election, the debates, Sarah Palin (although I think I could start a blog on that one alone) but I do want to talk about two pieces of Obama content that have come out in the last week.

The first is the picture above. It was taken by Obama's campaign photographer David Katz minutes before Obama entered the first US Presidential debate.

There have been thousands of pictures of Obama over the last few years - making speeches, on the campaign trail, kissing babies - standard political reporting. The Obama brand is extremly strong right now as well - it means change, youth and hope all at the same time. When you see him speak in front of 85,000 people, you can only be amazed and impressed.

The campaign has made him a symbol - he's not a normal guy. Not someone with a family, worries and fears. He's one of two men who could be the next President of the United states and he isn't like us. He's different.

Except photos like the one above make him appear normal. They make him seem like us - and that's why this could, possibly, become one of the most iconic images of the campaign. Because it shows him with the mask off.

No handlers, no media scrum. Just him and his thoughts - preparing for one of the most important moments of his life.

After seeing this image, I quickly read the popular Digg story about a warm gesture that Obama made to a complete stranger in the late 80's. If you've got two minutes and want to read a great post about his generosity, check this out.

Combine these two pieces and a new image of Obama is formed. A new brand.

He's an amazing speaker, academic, politician and father. But he's also just a guy who like to help people. And at his core, that's what his brand is all about.

The best brands focus on the core details that make them different. They weave a story that only they could tell.

And it's pictures like this that help show Obama might be an amazing, out of this world guy, but in the end, he's just like us.

- A great article about the $700 bailout and what the media is missing in the explanation
- Fallon planning explains the importance of brands that give rather than take (and shout)
- CNN is the latest victim of horrible online ad placements
- The price of a 30 second TV spot in the US has gone down by 4.1% - it's a only a cheap $130K now. Online growth has been cut in half too
- Think that the iPhone is unstoppable? Check out the huge rise in Google Phone searches since it's launch a few weeks ago
- Is Canadian creative going down the drain? Capital C chairman thinks so and is spreading the word about it
- Is Google buying TV spots?
- Obama is so cool he has a sweet iPhone app
- Think that your clients brand is important? What about yours?
- Before you start talking about how much you know about social media, check out this presentation (thanks to Katie B for the link)
Posted by Unknown at 9:37 PM No comments: Links to this post

Although Nokia's global market share is falling, their advertising is getting better and better. I love this brand spot for their N-Series line and hope it helps the brand.

Quite unreal to not show your product until the 1:31 mark of a two minute spot, but it works.

Posted by Unknown at 9:14 PM No comments: Links to this post

We've been blogging for over a year now and just wanted to say thanks again to all of our readers. It's always nice to complete a post, it's even better when someone sends you a note or comments on it so please let us know what you think.

Why are we so thankful? This TED video on the importance of praise:

Posted by Unknown at 8:52 PM No comments: Links to this post 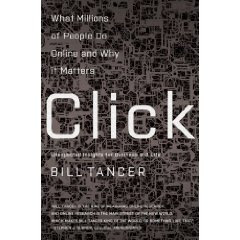 A few weeks ago, I finished reading “Click” by Bill Tancer. Tancer is one of the head researchers at a company called Hitwise. Hitwise is a company that uses search data from the major engines (Google, Yahoo, etc) to understand how the web works (and help companies make decisions in the process).

What drew me to Click initially was the endorsement from Freakonomics co-author Stephen J. Dubner:

What Click teaches the reader, though, is how important search data is. The book begins with a good overview of some of the most popular searches in the US – what was the most-searched term in 2004? Paris Hilton.

Tancer then goes into a number of different examples of how to use search data – from optimizing a marketing campaign against the time when people are most interested in your product to analyzing how a new idea spreads across the web.

It’s a quick read but one full of case studies and interesting facts (such as the most frequent “How To” search or “Fear of” searches). The data is telling and an analysis like this is only the tip of the iceberg.

If Google is truly the “database of intentions” than “Click” is the beginner’s interpretation manual.
Posted by Unknown at 8:33 PM No comments: Links to this post